My Wife decided after over a week of thinking.

I was going to write about how fun my weekend was.  I really had an amazing day on Saturday, filled with new people, old friends and new experiences. 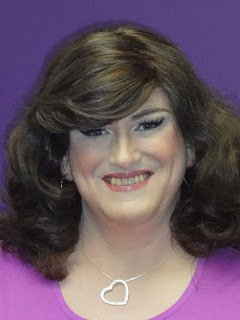 But then Sunday happened.

I'll still write about Saturday someday, but Sunday was more... well... it was rough.

The Sunday after a weekend out as Sophie has always been brutal, and not just due to the "Pink Hangover."  Wife has always been very vindictive and makes me "pay" for going out with extra chores and often extra "motivation."  Like drill sergeant style.

It started Sunday morning. Mother in law (MIL) lost it on me while Wife was at church with daughter. Seems that no matter what I do, she's unhappy or downright furious (kind of like how the Republicans regard President Obama.)  Then Wife came home and MIL bitched at her. As I was working on things in the back of the house, I didn't hear exactly what was said, but it was something about me being "lazy" and "never does ANY work."  W started bawling, and MIL left to go babysitting.

Yes, someone put THAT witch in charge of their kids.

Then Wife lost it on me.  MIL wanted me to continue weeding in a copse of trees on the property.  It was already over 90 degrees outside, and my back was still a little sore from the night's escapades (wearing heels.)

I told her that I'd go outside and work until I dropped dead from the heat as "that would make your life so much easier, right?"  I was very angry and frustrated at this point. 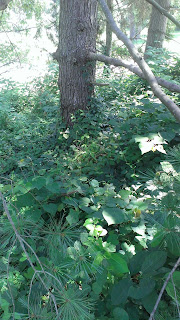 The weeding.  I'm not kidding- this really is it!

I went outside in the 90+ weather to do more weeding. I worked until I was ready to pass out and my back hurt VERY badly (maybe 45 minutes.)  This was the second time I'd worked on this job, and I still wasn't a third finished.  There were SO many weeds!  And so many thorn bushes!

I came back in, limping, bleeding from many tiny cuts, and absolutely soaked in sweat.

"Done yet?" Wife said with a bitter tone.

I just glared at her and took a cold shower. It was 90 minutes until I had to go to work.

After the shower, I laid on the couch in one of our rooms to watch Phillies and rest my back. Wife came in to bitch that the massive weeding job wasn't finished. I told her I was going to leave the room as I'd had enough. So I went to the bedroom, turned on the floor fan and lay on the bed, trying to cool down.  She followed me and and sat on the bed.

I looked at her.  She looked back, her face red.  Then her lip trembled.

She started to cry.

She'd used this tactic many times in the past.  She cried and I was supposed to forgive her, cave in, and do what she wanted.  But I'd become immune to it.  It was always just a tactic.  Especially on a Sunday.

She told me she wasn't going to move out with me- that she wanted to stay in that hellhole with her mother.  And that "she could never live with a woman."

She never wanted to see me as Sophie- ever.  Ever.

"I know you can't help it.  I know it's a physical thing not mental.  I know you don't want this.  But all I want is my husband.  I want my husband- not a woman."

That's when I started crying.

I told her I didn't blame her for her decision.  How could I, really?  I told her that I understood.  And she hugged me, and we both sobbed.

After we cried a while, we pulled ourselves together and talked a bit. Discussed options.

If we get the loan, we still get the house together.  This removes my daughter from MIL's toxic influence and provides her security.  Said house should be affordable by Wife without any monetary input from me.  I stay in the house until the changes reach a point that she finds intolerable.  Then I move out.  Perhaps during that time, take in a boarder to assist with the mortgage.   After moving out, divorce proceedings begin.

I move out ASAP.  Divorce proceedings begin.  She stays at her mother's with my Daughter.

I move out after thoroughly researching places, etc.  Divorce proceedings begin. She stays at her mother's with my Daughter.

She asked when I intend to transition.  I said it was at least a year away- probably three.  She said "Ok, we have some time then."

I've been Sophie now for four and a half years since my "re-awakening."  I've done a lot of research on being transgender, and I've read a LOT of life stories.  While they tend to follow a pattern, there are usually variations on the pattern.  Like different musicians interpreting the same piece of music.

And usually, the wife leaving is part of the pattern.  Almost a rite of passage.  I read somewhere that only 3% of marriages survive a spouse transitioning.


I've received many comments on Facebook, where I gave a brief description of events.  People have been so kind.  I've also received many texts, emails, and messages.  Many are from those who have already walked this path and survived.  They offer wisdom and encouragement.  Still others are from those who will never endure this particular brand of hell, but send their support.

Some are from "admirers" who smell blood in the water and think I'll be an easy score.  Think again.

And it hurts.  It really does.