An alumnae's thoughts on Horror

A lot has happened at my alma mater in the past couple weeks. In case you’ve been hiking in the distant Misty Mountains with 12 dwarves and haven’t heard, a former assistant football coach at Penn State was arrested for having sex with underage boys. In addition, the head coach, Joe Paterno, was fired after 60 years of service and the president of the university, Graham Spanier, resigned. This is because they may or may not have known what was going on and didn’t stop it.
I’m not here to debate the facts, rumors, or anything else of the case. Even though he is presumed innocent until found guilty, Sandusky has already caused so many people pain- his alleged victims, his former coworkers, and the over half million living Penn Staters. The media have already judged him, as have almost else.
No, this is my blog, so I’ll tell you how this makes me feel.

Actually do I need to tell you?

By the tone and words of people I have spoken with (and seen online) it seems that NON Penn Staters think ALL people from PSU: students, alumni, staff- knew about these deeds and were happy to let them continue. Umm that’s not how it is in reality, folks.

When I heard the news, I was at Beauty at the Beach. It was like someone kicked me hard in the stomach. I felt very sick. Lost. Helpless. I’ve spent the past two weeks defending my love for my alma mater to almost everyone. I AM a Penn Stater. I am STILL proud to be a Penn Stater. I even had one person in my face saying that unless I personally went to Happy Valley and KILLED Sandusky, Paterno and any and everyone who MAY have known, then I had no right to call myself a Nittany Lion. As I was at work, said person kept their teeth.
“An older woman who likes young boys is a cougar. An older man who likes young boys is a Nittany Lion.” Heard that one a zillion times.

I can’t speak for all Penn Staters, only for myself. I am crushed. It feels like a beloved uncle did this, and the family is disgraced. I see Penn State’s name dragged in the mud every day on the news and it hurts. (please spare me the “not as much as his victims” bit. We all get that idea, ok?)


My Penn State experience was one of the defining moments of my life. I went there because it’s spotless reputation in academics and that even our football program was clean. We could hold our heads high. At PSU, we were taught to work hard and that if we did, good things would happen. Do things the RIGHT way. (Yes, many schools have codes of conduct, I know, but I didn’t attend them.)

We all took it seriously, and held each other to that higher standard- during school and after graduation. When I was hiring people in past jobs, if a Penn Stater’s resume crossed my desk, I knew what I would get, and I hired many Nittany Lions.

Now what? The university is disgraced. All that I was taught there, was it a lie? A big fat lie wrapped in Blue and White?

And if Penn State is dirty, then can ANYONE be clean? Anywhere?

I hurt. Still. No end in sight as this will probably get so much worse before it gets better.

What will be left of my school when this is over? Some people call for it to be closed. We will definitely see enrollment drop, and with the over 50% cut in funding from the commonwealth; we may not be ABLE to stay open.


So many questions. No answers.

Sandusky does not represent me. Someday, perhaps, all will heal and there will again be laughter in Happy Valley. But I can never see it the same way ever again. The unstained pillar of my strength is gone.

Dante says that Sodomizers are doomed to the Inner part of Hell’s Seventh Circle. There they all reside in a desert of flaming sand with fiery flakes raining from the sky. Is that enough for the likes of a man who destroyed those boy’s lives and the lives of all who hold Penn State dear? Will he even see trial or will he take his own life first?
I don’t know.

The only thing I know is this:


I AM PENN STATE.

And I always will be.

Posted by Sophie Lynne at 6:44 PM 2 comments: Links to this post

Sophie at the beach

Last week I went to a conference called “Beauty and the Beach” down in Rehoboth Beach, Delaware. I won’t bore you with the day to day minutia. If you want that, please check my TG Forum column here: http://www.tgforum.com/wordpress/?p=12257 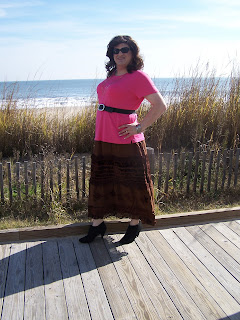 On the boardwalk, first day.
What matters the most to me was what I learned from this one and the friends I made. I could just spend a whole blog of shout-outs, but that’d be dull. They know who they are.

The experience was actually kind of strange. I arrived on Wednesday, and after unpacking a little, went for a pedicure at “Bad Hair Day” a few blocks away. Then I discovered that they did makeup as well, so they did that for me. I went back to the hotel, changed and walked the boardwalk for a while. I got a couple looks, but nothing major. Yet I did it- I walked around alone in broad daylight as a woman. It was wonderful!

I have a lot of family in lower Delaware (where Rehoboth is) as that area was where we all vacationed while I was growing up. Many of my cousins moved down there when they became old enough. Frankly, I never liked it- it was dull to someone without a car and who couldn’t attract a girl even if I taped $100 bills to myself (as was the case when I was a pre-teen and tween.)

One of the things we did back then was we’d come to the Rehoboth boardwalk once per visit. My brother and I would hit the arcades, etc. I remember watching the girls and thinking how lucky they were to be female- and this was when their journeys were just beginning! So it was extra special to retrace my steps that day, but now it was I wearing the heels and the skirt.

That night, I met some new people at dinner and we went out drinking. I seem to drink a bit at conferences. Character flaw. That night I went out dressed in a sweater, jeggings and boots. I really enjoyed going to a club in jeans and boots. I felt hot. My feet hated it though. After the bars closed, I went back to the boardwalk for another walk. It was very emotional for me to look down and see breasts and know I appeared female while walking the boards at night. 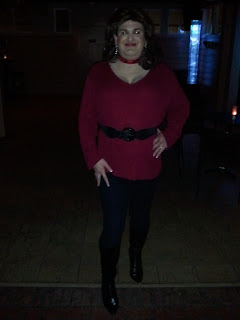 Night at the bar

So the next day, I did my own makeup. I wore jeans and a different sweater and walked about town a little. I must say that this was one of the best parts of the trip: walking around alone as a woman, shopping. I felt my hips sway as I walked, heard the clack of my ankle heels, and felt my breast forms bounce slightly in my bra. I was in heaven. 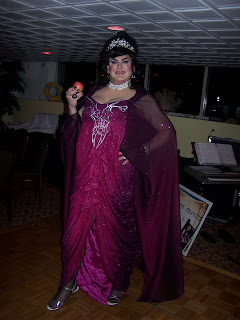 Evil Queen Sophie
That night was the costume contest. As I spent a lot of money and time with Lorraine getting my costume made, I really thought I had this one nailed. But I didn’t- came in second. The other costume deserved to win. And she made it herself. So back to the room, back on with the LBD and out for karaoke at the Blue Moon. The hostess saw me kneeling in front of the table with the song book and called me a “midget Amy Winehouse.” That was funny! I drank a lot, and sang “Love Stinks.” Walked home with a group of gurls and hung out in room 123, which was a large suite with a hot tub in it.

Friday, the wind blew! 30-40 mph sustained winds all but trapped us in the hotel. I did trivia, and basically hung around. That night was a “Hot legs” contest. Got my makeup done by Amanda Richards and wore my shortest skirt. I placed in the top three, of which I was very proud. So I changed into a longer skirt for a bit, then into a different outfit for partying at the bar. Drank a LOT. 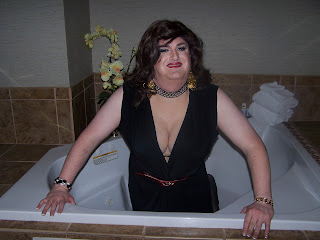 Don’t Ask.
Saturday I felt like shit. Go figure. The hotel bar is cash only, so I went to the ATM to get some. Good thing I was in drab, as I bumped into a cousin. We talked for a bit. I was scared shitless. My cover story to everyone at home was “business trip around PA.” And what if she’d seen me as Sophie?

I was rattled- hard.

Went back to the room. It was a cloudy, windy day. I felt physically ill. I felt like everything about me was wrong. I mean, let’s look at it: I lie to my WIFE, to my work, to my friends, and to do what? Put on a dress and a bra and hang out at a bar? I packed up most my things. I lay on the bed, staring at the ceiling thinking I should just go home. I wanted to go home and avoid everything.

Then Jone called from downstairs. And I went to her room (the now infamous suite 123) and we talked. She and another girl said I should tell my wife- sooner the better. Hard to argue that except for that one lil issue of “What if she throws me out?”

I stayed around. Amanda Richards did my makeup again, and when she was finished I looked in a full length mirror. Staring back at me was a woman. Me. Not some crazy ass mess of a guy- but a woman named Sophie. It made everything better for a moment. I smiled. 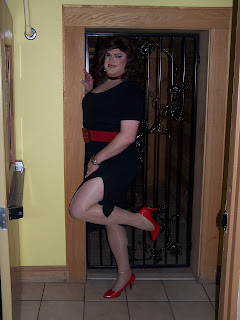 That night, I did a comedy routine for the show and people seemed to love it. I received a lot of compliments. I love compliments! What girl doesn’t? ;) After the show, I had my first drink of the day. I would only have one other. 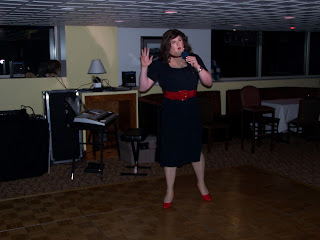 Doing the stand-up
Later that night, we all sat in Jone’s room again. The mood was subdued. I really wasn’t in a talking mood myself. My hose were off, as was my corset. I sat on the floor in my dress. It wasn’t a question of “wrong” at that point. Being in a dress was right. The rest of my life seemed wrong- or is it just the way I’m conducting the two parts?

I drove home the next day. I didn’t tell my wife. I still haven’t. I’m scared. I went to Rehoboth to conquer a fear (of being dressed near family) and failed. I’m more scared now than ever.

At least I met new friends and enjoyed the time I WAS properly dressed. It was a good conference. Shame I couldn’t take away the lessons and make them work- yet.

Posted by Sophie Lynne at 6:49 PM 2 comments: Links to this post