Men of The Skull- Introduction and First PSU Chapter

Due to numerous requests, I've decided to post a part of my unpublished book of PSU fraternity life in the 1980s, Men of the Skull.

Here's a little background.  In the late 90s, I was in a lot of Pain.  I was drinking heavily, angry all the time, and couldn't figure out why.  Nor could my Wife.  My thoughts kept drifting back to my time at Penn State, and events that happened there that sent me into a deep depression- one from which I realized I'd never fully recovered, and eventually led to a suicide attempt in November 1990.  I decided to focus my "quest" to figure out what was wrong with me on my college years.

Up until that point, I had written some short stories, some gaming modules, and some pieces for international gaming magazines.  I decided to get serious about my writing- I would exorcise my demons by writing a memoir about my college days.  I have a remarkable memory for trivia, especially when prompted.  I had prompts- I have kept a journal since January 1984.  Also, I researched the events of the day for the book- the music that was popular, headlines, movies... anything to recreate the events which were at that point around ten years past.

That took time- a few years in fact.  I didn't go to Penn State first- I started at Drexel University as a Civil Engineering major.  I HATED it.  I hated the city, the school, the major... everything.  However, while at Drexel, I pledged a fraternity best known as Skull.  (At my brothers' request, I've redacted the name of the fraternity.)  After two years at Drexel, I transferred to Penn State as an Education major.  I wrote the Drexel part of the book first.  It, um, sucked.  All you need to know about that part was I joined Skull, I was a volunteer EMT, and, in the summer of '86, my girlfriend of 2 years ("Julianne") and I broke up.

That brings me to the PSU part of the book.  I finished it in July 2008.  In October 2008, I dressed as Lois Lane (accompanied by my Wife as Clark Kent) for Halloween.  A part of me that I had buried deep inside and fought desperately smashed into my consciousness.  But now there was a name for it: Transgender.  All the Pain, the anger- it was suppressing that part of me.  As the saying goes "You fight it and fight it and eventually it wins."  I transitioned in March 2014.  This blog is primarily about that journey. 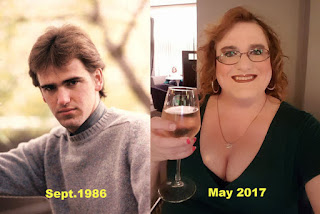 However, that leaves the book- rejected by tons of editors and publishers.  Here in the blog I will post the chapters of my first semester at Penn State: fall 1986.  I will post one or two a week.  If enough people read it, maybe I'll self-publish the rest.  I'm posting it as written with few if any edits.  I added the pictures.

The format of each chapter starts with the date of the event, then a headline from the news that day, usually from the Philadelphia Inquirer.  All names have been changed to protect the innocent, guilty, and otherwise, but aside from that, everything I wrote about really happened.  Song lyrics of the day are interspersed in the text as well- they are in italics.  I was Lance then- and this is his story.

That night, burned.  The hot summer sun was gone, but the parties were on: parties beyond counting, fun without limit.  The whole campus- the whole town- the whole valley sizzled with possibility that tonight, maybe, it would all come together: that sparks would fly and that we would make explosions and flames of our own that would burn on forever.  Or at least until dawn.
Her breasts stared at me through her lilac colored oxford.  Moderately sized (but bigger than any that I’d ever seen naked), big nipples-and the AC was up too high.  She wore a scarlet wide brimmed hat that looked like something from the 1940s.  Tight jeans.
“Oh let me be--- your sledge-hammer.  This will be my testimony.”
The music was loud, but not too loud.  Keg in the kitchen, beer in clear plastic cups.  And everyone wearing stupid hats.  The hostess was a girl who lived at the end of the hall- it was a Hat Party, and everyone was invited.  Price of admission?  Wear a hat: the goofier the better.  You wanna kick in a few bucks for the keg; that’s cool too.
Her face was broad- eastern European.  Freckles.  Biggish nose, permed curly brown hair and happy smallish eyes.  With nipples like hers, it was hard to keep eye contact.  The hat set off everything nicely.  She smiled and we talked about Drexel and and nothing in particular that mattered.  Eye contact, Lance.  I smiled and sipped my beer.  Her name was Sara.
My first Friday night at .  My first real apartment party.  And Sara was smiling at me.  She seemed interested in what I had to say.  I was scared shitless.  Don’t fuck up, Lance.  Eye contact. 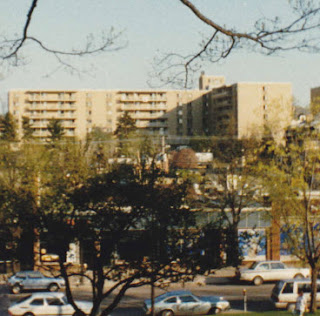 Our hostess, Katie, lived at the end of our hall: third floor Beaver Hill Apartments.  My roommates and I met her the day we moved in.  We helped her carry stuff up from her dad’s truck.  She bought us pizza and beer and we sat among the boxes in her place.  She lived alone.
I wore my black and yellow painters cap- backwards.  Dark blue button down.  Tan shorts.  Sara was a senior, 21, from .  She lived in Atherton Hall: the honors dorm bordering a block away from the apartments.  She smiled modestly and looked toward her feet coquettishly as I offered to refill her beer.
Brought it back, and we slipped over to the corner next to the mirrored wall.  All the apartments in this building had a mirrored wall- made the rooms look bigger.  Ooh.  Ahh.
The windows were open, and Delta Upsilon right next door was partying as well.  The sound of the crowd there mixed with ours, the music, and Sara’s husky voice.
I so wanted to suck on those tits.  Feel them.  Nibble.
“He do the walk… he do the walk of life!”  Dire Straits sang from the speakers across the room.
“So, why ?  A guy like you could’ve gone to lots of schools,” Sara asked.
I had a hard on that must’ve been sooooo obvious.
“Well, has the best looking women- like you!”  I smiled.  You fucking dork!  Jesus Christ! No wonder you can’t get laid to save your own life!
She smiled, laughed politely, and raised her cup.
“Well, here’s to !” she said.
We touched glasses and drank; my eyes never leaving hers.  Brown eyes.  She had brown eyes.  Chestnut.  A beer or two later, and she had to go.
“I have other parties I promised to attend” she said with a smile.
“It’s been nice talking to you!”  I said.  Ugh!  Dork!  Ask her for her phone number, you idiot!
“You too!”  She bent over and put her cup down on the table.  I had a great view down her shirt at those beautiful breasts in a white bra.  Wow!  Did she mean to do that?
“Um, can I have your number so we can, y’know, get together some time?”  DORK!
Sara smiled.  “Sure!”  She found a pen and a napkin.

Not a bad end for my first week of classes.  So far, was almost all I could ask for.  I moved in the Saturday before: Beaver Hill Apartments, room 324.
The apartment was small, but furnished.  The carpet was tan and the walls white, except for one wall which was covered by paneled mirrors.  The living room had a brown sofa, loveseat and a square glass topped table as well as two end tables with brass lamps.  The kitchen had a very small table and had a linoleum floor.  There was a large opening to the living room making a little “breakfast nook” as the ad called it.  The bedroom had two closets and three beds.  I was the first one to move in, so I claimed the single bed.  The other two guys would get the bunk bed.  The windows in the bedroom and living room faced the back parking lot and neighboring Cedarbrook Apartments, so the view wasn’t exactly sensational.  Lots of apartments had balconies, but not this one.  Off to the left of the parking lot was a large fraternity house: Delta Upsilon.  (DU). 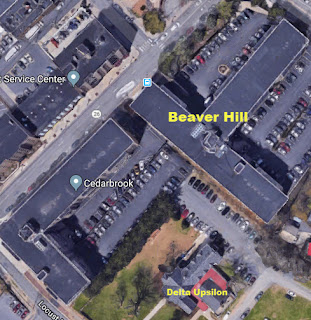 Marc moved in a few hours later.  We left our door open to “invite” the neighbors, like we used to do in the dorm at Drexel.  Put a life sized stand up of Freddy Kruger in the door (got it from Julianne’s dad).  A couple of people gasped.  Then one girl screamed.  We scared the shit out of her.
She was really cute!  Tall, short blonde hair, nice breasts, perfect hips- just really cute.  We had a good laugh with her and invited her in for a beer.  She accepted- but after she unloaded the truck.  So we helped, and she bought the pizza and beer.
We met a lot of other girls on the floor as well that day and the days following.  It was gonna be a great year.