The Smell of Memory

Smell is a powerful trigger of memory.

It's now late October here at PSU, and the leaves are falling.  I participated in an LGBT panel today on campus, then drove home.  I parked the car, and started walking toward the apartment when the smell surrounded me- the autumnal smell of fallen leaves.

That smell, more than any other, takes me back to my childhood.  The mile long walks home from elementary school, crunching the leaves in the grass on the sides of the sidewalk.  Jumping into leaf piles.  Yes, that smell meant summer was over, but it mean Halloween was close enough to touch. 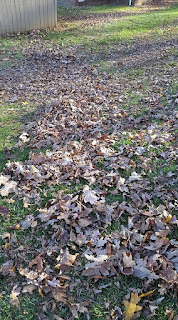 
That smell as I walked alone through the woods near the river; as I wandered around town in a golden fall sunset.  As I rode my bike to wherever.  The crunch of the corpses of leaves under my feet as I delivered the evening newspaper.  Walking to high school football games on dark Friday nights when the smell of the leaves would overpower the smell of the pickles on my hands after the shift at Burger King.

Walking the girl I desperately wanted to love me to her apartment after class on a late State College afternoon, her hair framed by the light of the sun setting behind us.  That smell playing through my life...

One of the few good memories I have.  In a few weeks that smell will be gone.  But I'll enjoy it for the heartbeat that it's here.

Posted by Sophie Lynne at 6:04 PM No comments:

Men of the Skull Chapter 57: In Tents Love

I remember this night, despite the alcohol.  Aside from the journal entry I wrote the next day, that is.  I remember sitting at that window.  I remember the lawn of Theta Chi and the tents.  The silhouettes in the tent.

This chapter refers back to my time at Drexel.  That's part one of the book, which I'm not posting because most of it is dull.  I was at Drexel for two years, studying Civil Engineering.  That's where I joined Skull.  My roommate both years was a guy we all called "Ripper."  In the first chapter of the book, I described him as:


My roommate “Ripper” and I lay on our floor, staring at the plaster ceiling.  Ripper was short- five foot eight at best.  He had an extremely boyish face which would’ve been more at home on a thirteen year old.  However, he was powerfully built: sculpted like a bodybuilder or a pro football player.  No one doubted he could kick ass.  Well, he could kick all of our wimpy asses anyway.  Ripper also had a dry sense of humor aided by a voice with the character of a deep dial tone.

He and three other guys on my floor pledged the "party house": Theta Chi.  (One other guy pledged the "jock" house: Sigma Pi.  That was the Drexel house most like Skull was at PSU.)

I transferred to PSU for fall 1986, and readers know the rest of the story from there.  When I moved back home from Drexel was the last time I saw Ripper- who has no social media presence.

Of our group that hung out together on our floor, "Kevin" was the partier.  He was the guy on the floor who always played his music loud, etc.  In a way, looking back, he was a prototypical "frat boy."  He was nice though.  I wonder if he graduated.

Time for another Crow party!  Of course I went.  Free beer.  And my girlfriend would be there ready to play games and laugh and drink.  Then I’d get laid.  Who could want anything more?
I spent most of the day doing the homework I blew off the day before when I was drinking at the Bone.  My Pyramid money must be making me boatloads of cash, shouldn’t it?
I went to dinner at this place that just opened the previous week called Baby’s.  Baby’s was (and as of this writing still is) a re-creation of a 1950s diner.  It’s right across from the Lion’s Den and next to McClanahans.  I went with Virginia, Judy, and two other Crow little sisters: Traci and Michelle.  It was obvious that Judy and Virginia weren’t speaking to each other.  Judy was more sullen than ever.  I felt so bad for her.  Who cares if she got laid?  Still, I had fun looking at all the cool stuff in Baby’s, like a sign that said “Famous since 1987.”  (Then it was funny, now it is just a statement.) 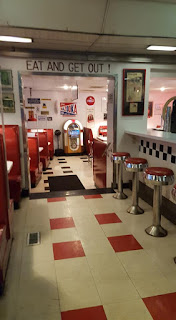 Sigh.  I cared if Judy got laid.  It meant that I could’ve.  I should’ve.  But I didn’t.  I didn’t have the guts.  I didn’t want to be the "other guy."
Oh well.  I had .  Things were good.
So anyway- it was the usual.  I went over Dave’s for a while, and at midnight headed over to Crow.  The nights were getting warmer, but I still had to wear my heavy blue jacket.
As always, there was a pledge at the door who waved me in (was he the one that fucked Judy?).  I dumped my coat and headed down the stairs to the bar passing two pledges on the way (maybe one of them?).  I found my usual spot and was in hers- beer waiting.
The dice were passed to me (as late-comer I was automatically three man) but I missed.  The rest of the bar didn’t though- between cups and dice I was hammered.  By the time the dice returned to me (after several reversals) I was sloppy drunk.  My first roll was a pair of 3s so I made Mandy the three bitch and staggered away, holding up the wall as I did as it kept threatening to spin over onto me.
Had a few more upstairs.  Saw more pledges (him? or him?  Couldn’t be him…)
came up from the bar and found me sitting on a window sill talking to, uh, um, what was your name again?  Somewhere during the week she learned that Theta Chi was having a big regional thing, and brothers from all over would be there, including Drexel.
“Wanna go see if your old room mate is there?” she asked.
“Shurr-burp-rr.”
was fairly drunk too so it must’ve been fun to watch us find our coats and put them on.  Must’ve taken at least an hour.  Or two.
Maybe two in the morning or so as we staggered across the wet grass and the streets headed for Theta Chi which was a couple blocks away.  Two in the morning and still that background buzz of noise and fun in the air.  God, I love !
Theta Chi and its neighbor, Phi Sigma Kappa looked a lot alike.  Drunk as I was they looked like huge mausoleums.  Theta Chi had lots of tents all over its yard.  What- their brothers couldn’t afford a fucking hotel?  (Still, drunken tent camping sounded fun.) 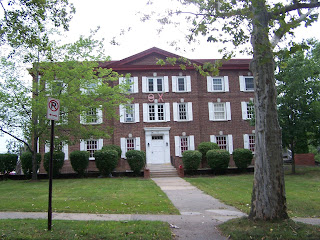 We bumped into a Theta Chi with puke all over the front of his faded red sweater.
“Where’s the Drexel guys?”  I asked him, speaking Drunkese.
“That tent over there,” he replied, also fluent in the language.
I staggered over to the tent and knocked on the red canvas.
“Hey is Ripper here?”  I called into the tent.
There were a bunch of dark shapes all sitting around- maybe ten of them.  It smelled like canvas and pot in there.
“Who wants to know?” a voice asked.
“I’m his freshman year roommate.”
“Hey Lance!”  It was Kevin, who lived down the hall from me that year.  He was one of the four people on the floor to pledge Theta Chi.
“Kevin!  Did you drag Rip or Mark or Tom with you?”
“No, they’re all on co-op.  Lame fucks had to work.”  Kevin’s voice said.  I couldn’t see him.
The whole tent laughed.
“How you, BURP, been, man?  I asked.
“Drunk!  Bizniz majors still have it mmmade at Dddrexel!”
Another round of laughing.
Good seeing you Lance!” he said.
“Yeah, get out” said a voice.
“Yeah.  Tell everyone I said ‘hi’ and that I love it here,” I said.
I stumbled away from the tent.  was watching.
“That was fuckin’ rude!” she said.
I started staggering back in the direction of campus.  I could hear the Whales Tails game resume in the tent behind me.  I never saw Kevin again.
I stumbled on Phi Sig’s lawn and fell hard on the mushy wet grass.  After a few seconds of collecting my thoughts, I then rolled over and saw standing over me, offering her helping hand and smiling.
“Kandler!  You are a mess!!” she said with a little chuckle.
My girlfriend.  We’d had sex, we’d drank together, we had great times, and she had a hot body.  I was happy drunk.
So I laid there on my ass and flashed her the sign language sign for “I love you.”
“You’re just drunk,” she said suddenly serious.
“No really!”
“We’ll see how you feel tomorrow,” she said, helping me to my feet.
I expected a better reception than that!
So we walked back to my apartment, plopped onto the couch (getting mud all over,) fucked, and passed out.
The next day, I felt the same.
I was Young, at , and in love.

Posted by Sophie Lynne at 11:38 PM No comments: