Yes, this actually happened.  I witnessed it twice.

This chapter is Pure 80s misogyny.  Guys assumed that women WANTED to see their junk, and some showed it off.  The brutal truth is- some of the girls responded positively.  They WANTED what they saw.

There was and is a "rape culture" on campuses.  Usually, the more conservative (or "rich") the campus is, then the worse it is.  At PSU, usually 1-3 rapes were reported in my time there.  Figure ten times that went unreported.  All one needs to do is look at the Brett Kavanaugh hearings to see the Entitled feeling of privileged guys who saw women only as recreation.  I knew MANY guys like this in college... and after.  I'm sad to say some of them were my fraternity brothers.

And what did I do about it?  Nothing.  If I'd seen attack happening, I would've stepped in, of course, but mostly these happened behind closed doors.  However, one attack happened behind our fraternity house, near the dumpster, which was ten feet from the window of the room I occupied at that time.  I heard nothing- probably because of drunken sleep.

Not speaking out was Cowardice, pure and simple.  I was so different from my brothers, and so desperately wanted to fit in, that I didn't speak up.

Chapter 40: Peso Run
Thursday, January 22, 1987 Shultz says talks continued
The party was fucking packed!  We had a social right before with Chi Omega so there were lots of hot girls.  I was in the foyer talking with Garbo when he said “Watch this” and pointed to the Brotherhood Steps.
Down the steps came running one of the brothers- Peso.  He was Italian throughout: olive skin, black hair, dark eyes.  Even I could tell he was a good looking guy.  And if I could tell, the women must’ve drooled over him.  And they did.
Wave your hands in the air
Like you don’t care, glide by
The People as they start to look and stare.
Do your dance, do your dance quick
Mama, come on baby, tell me what’s
The Word, ah – word up,
Peso came running down the Brotherhood stairs naked as the day he was born.  He jumped the rope at the bottom, ran a loop around the foyer, then ran back up the stairs.  He stopped at the landing, raised his arms as in victory, then ran the rest of the way up.  Totally naked.  Being naked, one couldn’t help but notice his dick.  It was huge.  He was extremely well hung.  I was envious.
So he disappeared and the room broke out into cheers, gasps, and applause.  The girls looked wide eyed at each other, talking.  Some looked stunned.  A few stomped out the door. 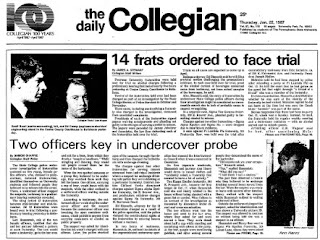 I looked at Garbo
“Does he do that a lot?”  I said.
“He does it at the beginning of a semester.  See, that way all the girls get talking about him.”
“And his dick.”
“Exactly.  He gets all the tail he wants, when he wants it,” Garbo said.
“Pretty smart,” I said.
“Yeah.  My pledge brother,” he said, and refilled my beer from the pitcher he held.
Next Chapter