Men of the Skull Chapter 39: Lies

This chapter was painful to write. It's not like I had problems with the details- because I didn't.  I remember this with crystal clarity.

It isn't every day when a person compromises everything they believe in- the very foundation of their self... to someone they really care about.

Over the decades, I became quite adept at lying.  After all, I lied to myself my whole life, and lied to everyone else until I started admitting my Truth to myself, my Wife, and, in march 2014, to the rest of the world.

Lies have consequences.  They eat at one's soul.

I absolutely believe that even if I lost everything (and I have), I'd still have my Word.  I held that as sacred.

And, on that miserable evening, I looked into the gray eyes of a woman I really cared about, who I wanted to be with... and lied.

I never forgave myself for that.  I don't think she's forgiven me either.  I know she didn't while we were still in college.  We're still friends now, and a lifetime has passed- she may even have forgotten it.

So, here it is- another moment where I'm an absolute a**hole.  Not the last either.  I became very adept at that over the years as well.

“We need to talk,” Judy said.
Shit.  I’d already figured out that those words meant nothing but bad was coming my way.
It had been a strange up and down kinda two days.  The day before, Mark got a call from Rich.  Rich said he wasn’t coming back.  He’d continue paying his part of the rent, though.  Now the tiny apartment was just two of us, and it seemed so much bigger.  As a bonus, Rich wasn’t going to reclaim his desk until the end of the semester.
So Mark was out at the gym when Judy arrived, bundled against the cloudy cold dusk.  I was typing homework on the Mac when she showed.
“We need to talk” she said as she removed her jacket.
“Ok.  What’s wrong?”
“Can we sit down?” 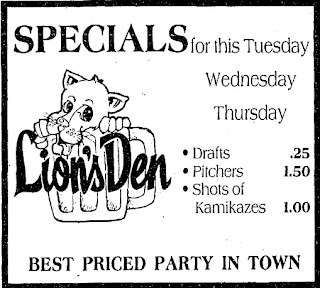 I pointed to the couch and love seat but she shook her head ‘no.’ So, I pulled the chair in from the kitchen.  I sat at the one in front of the desk.  The kitchen light was the only light on in the place, so it was as dim as the cloudy sky outside.
Once we were settled, I asked again.
“So what’s up?”
“Did you have sex with again?”  Judy asked with the cold tone I’ve heard too often.
I felt that familiar ache in my chest, like everything was crashing down and finished.  Virginia and I talked after the last time and promised each other never to mention it to other people and deny it ever happened if asked.  This was mainly because I still wanted Judy, but I didn’t tell that.  I couldn’t lie to Judy.  I mean, after all that had happened, and I was hoping that everything was going to start coming together…
You don’t have a choice.  If she finds out, you’ll lose her forever.
I cannot lie to her!  She’s…she’s
She’s gone if you tell the truth.
Shit.  So what did I say?
“No,” I said.
I lied to her.
I looked straight into those beautiful gray eyes and lied.  I felt terrible.
“Are you sure?”  Judy said.
“I think I would know it if I got laid,” I said.  “Why?”
“She’s been acting very strange.  Sometimes she’s very happy, sometimes very difficult.  The last time she acted this way was after the two of you hooked up.” 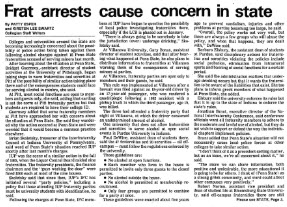 “Oh.  Wow.  I didn’t notice.”
“Are you sure you didn’t have sex with her again, Lance?  I won’t be angry.”
Bullshit!  I remember the last time.
“Yes, Judy, I’m sure.  I’m not about to make that same mistake twice.”
“Do you think being with her was a mistake?”
“We talked about this.  It hurt you.  I never want to see you hurt.”  I felt bad enough already.
She looked at me for a moment.  She must’ve known I was full of shit.
“Would you like to come down for dinner tonight?” she asked.
“Sure!  I need to finish this bit of homework first though.  It’ll take me maybe twenty minutes.  Wanna wait?”
“No.  I’ll go ahead.”  She stood and went to the closet for her coat.  I watched her ass for a moment, and then followed.  She turned to look at me.  Her eyes were cold- cold as that night at the Lion.
“I’ll be there in about an hour I guess” I said.
She left without saying a word.
I felt absolutely horrible.  I just lied to the person who meant more to me than, well more than anyone in the world.  Lied to her face.  I felt sick.  I wanted to puke- no shit.
I felt hollow.  The familiar plastic dummy hollow… no it was worse.  I wasn’t plastic.  I was hollow…