This is an old story goes back to spring of 1990.  I think it was April.  (The journal that has that month and year in it has been in storage for a long time and I have no idea which box it's in.)  In any case, it was night and my girlfriend of the time (GF) was visiting.  I was living still at my parents house at the time, and we were both going to head down to her place to hang out for a little while.  She lived in Wayne.  We were each driving in our own cars. 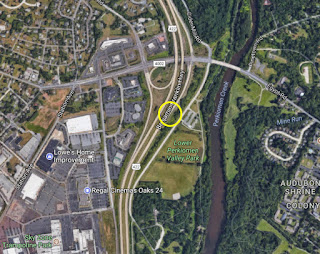 We were heading east on route 422, right around the Oaks exit, when I noticed a pretty serious car accident in the opposite lane.  At least two cars were involved, and there were a lot of other cars and trucks stopped in the area, but no Emergency Equipment yet.  GF was ahead of me in her car, but I pulled over- knowing that she knew that I was going to stop.  After all, I was still a paramedic at that point.

I ran across the grassy median, and went to the closest car.  The driver was a young woman- I found out later she was a college student, but I'll get back to that.  She was still alive.  In the back seat was someone I knew named Shannon, who who graduated from my high school.  As it turns, out she had some first aid training and stabilized the victim.

Knowing that she was there, I then went to the other car, where there were two Burly men doing their best to pull the door open using a crowbar.  That car was in far worse shape.  I looked inside and there, through the broken driver side window, and I saw one woman laying on the front seat with no seat belt.  Her body was pretty banged up.  I told them to stop for a second.  I reached in and took a pulse from her neck- carotid artery.

There was no pulse, and the body was already getting cold.  I couldn't declare anyone dead, but in this case, it was triage.  I understood that I should focus my efforts on the living, so I told those two men not to bother and instead focus on traffic control. I gave them directions what and where they should move their big rigs, which were blocking the entire Road.  It was my thought that help may be coming from that direction.  They moved their Rigs and began directing traffic around on the median.

I went back to the other car.  The victim was wearing a Drexel University jacket.  I figured she was around 20 years old, and the impact, even though she been secured by the seat belt, had caused both of her eyes to pop out of their sockets and rest on her cheeks.  I'd seen this before, and it's never pretty.  I did not have the equipment to do anything about that.  With Shannon's help, I finished stabilizing  the woman's knee injuries and did my best to stop the bleeding.

It seemed like an eternity that we were in there.

It's funny how you see someone who you haven't seen in years, and I was there in front of a person who's literally dying, and we were chatting about high school. What else could we talk about?  I mean, there was nothing we could do for the victim at that point.

As I said it seemed like an eternity, but eventually help came.  One of the paramedics with whatever fire company had come came to this car, and I explained to them the situation, gave the vitals as I had them, and they took over.  Shannon came out of the back seat.

The Drexel woman died the next day.

The cause of the accident was that the one car came up the exit ramp driving the wrong way at high speed.  She quickly found a target.  She left a suicide note at her house.

In this case, neither survived. Due to one person wanting to commit suicide, another innocent person died.  This girl who was around twenty years old at the time would now be around 47.  She would be a mother or maybe even a grandmother- but she's dead.

I never really considered that at the time, because she was only a couple years younger than me. I was 23, so I didn't have the perspective that I do now.

That November was my first suicide attempt.  If I could've given my life to that girl in the car so she could finish college, have a family, experience life, I would've happily done it.  I still would.  I still believe her life was more important than mine.

I still see her face at times, especially at night when I try to sleep- eyes on her cheeks.

I had a conversation with one of my dearest friends the other day.  I mentioned that my reward for being a volunteer paramedic was PTSD, bad hearing, and a bad back.

Meanwhile, people who never worked or volunteered a day in their life make more money in an hour than I'll ever see in a lifetime.

I hope my Pain has earned me Heaven.