I've written this blog since December 2008.  Over the years, I've done my best to keep my family matters quiet.  I've written about Wife and daughter occasionally, but I never name them to maintain privacy, as well as security.

Wife is a very private person.  Strange, isn't it?  That she would marry someone who spills their guts in writing for so long.  Before I was thrown out, it was like we were total opposites when we went out- I was full of noise, alcohol, and bluster, all covering my inner pain and insecurities.  But really, we are far more alike than different, especially at home. 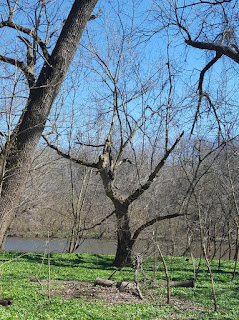 At the park- a creepy tree

As I've written many times, I write this blog to get things out of my system.  Maybe it's good that so few read any more.  I wasn't going to write about this, but in this time of isolation, in this time of deep depression... I need to talk about this.

Yesterday morning, I drove east to see Wife and daughter.  I have so much work to do, yet I knew that if I didn't go then, it may be a month or more until I see them again.  I needed to see them- to hug my daughter- to pretend for a moment that everything would be ok.

We went to Wendy's in Oaks, drive through of course, then over to the nearby Lower Perkiomen Valley Park.  Wendy's was out of regular coke, so I got cherry coke, and Wife got a lemon coke.  We ate, talking about Daughter's school work and mine.  The sun shone hot through Wife's car windows, making me sweat a little.

Wife then said she had something to tell me that she wanted to say in person.  My heart sank instantly- nothing good ever followed those worlds.

Wife told me she was diagnosed with breast cancer.  It was caught very early- there is a 99% chance of a total cure.  She'll find out Monday if she'll have a lumpectomy or total mastectomy.  She'll tell me when the surgery will happen, but doesn't want me to be there.  She doesn't want pity.  She doesn't want a fuss.

That's how she is.

Daughter was told Friday night.  I understand how she feels- I was in college at PSU when I received a call from my mum saying that she'd had surgery for cancer- past tense.  It was already done.  I remember that surreal feeling of "mum has cancer."

This was different.  Wife and I have been together nearly 30 years.  Next month will be 27 married.  (6 1/2 separated.) To hear the person whom I promised before God and a congregation of loved ones to love, honor, and cherish "all the days of you life until death do you part" tell you she has cancer...

I can't describe that feeling.  I can't.

After dropping her off, Wife and I spoke privately, and I told her the same thing.  I told her that anything she needed, I was there.  She smiled and said "I know."  But she doesn't want a fuss.  She doesn't want to be patronized.  And as I wrote above, that's her.

We hugged.  I held the hug and told her that I loved her.  She told me she loved me.  I got in the car and drove back to State College.  I was good- I didn't start crying until I reached the turnpike.  But it was a long trip back, as I had to pull over several times as I couldn't see through the tears. 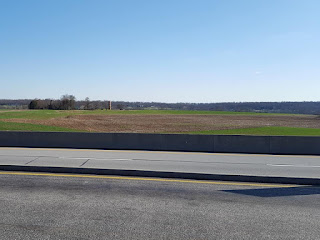 I took this one of the times I pulled over.  Life goes on I guess.


Now I'm here.  The sun is shining, and I'm writing instead of doing my mountain of work.  132 miles awáy live my Daughter and my Wife, who has cancer.  I'm helpless to do anything.

I wrote long ago that I couldn't imagine living without Lisa Empanada in my life, and that was true.  But this is different.  This is Wife, with whom we have a daughter.  We had a family.  Despite our years of separation, I cannot comprehend of a world without her in it somewhere.  I always expected that I'd die first, long before her, and that Daughter would have her to rely upon for decades upon decades to come.  I know Wife will be fine.  I know the percentages, etc.  But I'm still crushed by this.  It just isn't fair.  Nothing in my life is.

Why does everyone I love gets sick or dies as I keep living?  They deserve life more than me, yet here I am.

I'd normally say "cue all those people saying 'stop being so negative' and 'pull yourself together.'"  But no one reads my shit anymore.  And I need time to process this.  And I have lots of homework to do.

It's a sunny day outside.