I wrote this paper for one of my classes this semester.  It was worth 40% of my grade in that class.  The class' purpose was to examine the literature, issues, and perspectives of transgender people of color.  It was the hardest class of my graduate career.  The instructor wanted it to be "less formal than academic" and to use the "style of your discipline" (which for me is APA.) 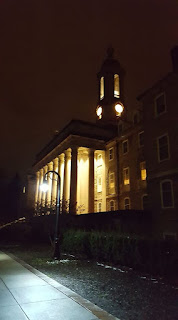 Still, it isn't the easiest read.  It's still an academic paper, after all.  However its topic is Violence against transgender people.  So here it is, warts and all, exactly as I submitted it.

Introduction
“There is anecdotal evidence to suggest that anti-Trans sentiments are pervasive in Western culture.” (Hill, D. B., & Willoughby, B. L., 2005, p. 531.)  My area of research analyzes cisgender (cis) and transgender relations, specifically why do cis men hate transgender women to the point where the men murder them.   According to research, the perpetrators are always male.  (Jauk, 2013, p.815.)(Stoltzer, 2009, p.176.)  I will approach this from an Adult Education perspective, as I believe that education is the only way that transgender (Trans) people can overcome the waves of hate and violence arrayed against them.  I narrowed the scope of my research to transfeminine people to make the study more manageable.
This paper will examine physical and sexual violence on transgender people. Verbal harassment is so common that many transgender people don’t even consider it as violence. (Dauk, 2013, p. 812.) so for brevity’s sake, I won’t explore it.  (I encounter verbal harassment almost every day when I am in public.)  It will also examine self-violence by transgender people: suicide.  I will then show how one can lead to the other.  I selected these articles from the literature due to what they contained, but read them not just for content, but also examining the content for whiteness and intersectionality.  I want to make sure my work does not use whiteness as a baseline, and that Trans of color are fairly represented.
I write this paper from my perspective as a Caucasian transgender woman of European heritage.  I acknowledge that while I endure the struggles that almost all Trans people face in the United States, my struggles pale in comparison to those who face the intersectionality of racism, transphobia, and necropolitics.  I write this paper as part of my search to understand the total Trans experience, not just what I and those I know encounter.  As this paper is part of my search, I will include some anecdotes and thoughts from my journey.
Physical Violence
Trans people are frequently victims of violence, “because of their gender non-conformity.”  (Stotzer, 2009, p. 170.)  Violence takes many forms, but Stotzer (2009) wrote that verbal harassment, physical violence (including murder), and sexual violence are the most common.  (p.171.)   “Numerous studies have demonstrated that transgender people experience high levels of violence from strangers and known others alike, and that they often face a lifetime of repeated victimization.”  (Stotzer, 2009, p.171.)  None of this is news to Trans people, as we live it.  We always check our surrounding to make sure we are safe, and, among the group of Trans people I know, especially in Philadelphia, we never go anywhere alone at night.
I searched for sources of statistics of transgender violence.  I found many different sources, and while their actual numbers may vary, they all agree that Trans people experience higher rates of violence than cis people. (Dinno, 2017, p. 1441.) I read many papers on the topic, yet only one separated reports by race.  All others lumped all Trans people together for statistical purposes.  That one report, Dinno (2017.), found that:
“Transfeminine residents aged 15 to 34 years who were Black or Latina were almost certainly more likely to be murdered than were their cisfeminine comparators. Indeed, as Table 1 shows, a large majority of transgender homicide risk is borne by young Black and Latina transfeminine individuals. Because the rate of cismasculine murders among Black and Latino US residents aged 15 to 34 years is so high, the possibility that transfeminine Black or Latina residents aged 15 to 34 years have even higher rates of being murdered is alarming." (p. 1446.) 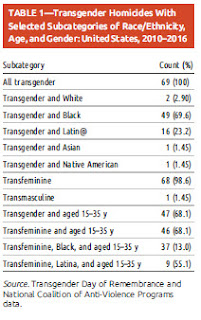 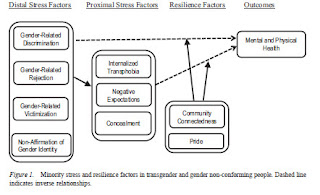 (Testa, et al., 2015, p. 67.)
Distal stress factors are external to the person, while Proximal stress factors are internal.  The distal factors lead to the proximal factors, which can lead to SI.  However, there are the resilience factors: Community and Pride.  In the model, these can counteract the negative stress factors.  Being connected to the Trans community and having pride in their identity are crucial to surviving the negative experiences that affect Trans people daily. (Testa, et al., 2015, pp. 66-7.)
The Community aspect of the model relates back to Meyer’s model.  This is significant.
“Meyer pointed out that not all of the effects of minority stress are negative. Members of minority groups typically develop coping and resilience in response to prejudice and other insults. In particular, by coalescing around a minority identity, minority members avail themselves of “important resources such as group solidarity and cohesiveness that protect minority members from the adverse mental health effects of minority stress” (p. 677). One way that minority members accomplish this is by creating a within-group identity against which they may then compare themselves, rather than using those whose prejudice they face as their comparison group. In this process, minority members begin to “evaluate themselves in comparison with others who are like them rather than with members of the dominant culture” (p. 677). This reappraisal allows members access to validation that might not otherwise be available to them. As a group, minority members create a positive view of themselves that effectively counteracts stigma.” (Hendricks, M. L., & Testa, R. J., 2012, p. 462.)
This applies to all minority groups, including Trans and Trans of color.  I know in my case, the Trans community is who kept me alive when I was at the greatest risk of suicide.  I began not caring about what society at large thought; I just wanted to be a positive force in my community.  I stopped comparing my appearance to cisgender women, as I could never compete with them.  Applying my experience as transgender, I hope that the Trans of color community, who face worse violence than me, find strength within their shared community.
Testa and colleagues mentioned the racial composition of their study group in each piece, and in each piece, they are overwhelmingly white.  I wonder if they used more Trans of Color if the results would be different.  While the model seems universal, the higher prevalence of violence against Trans of Color may change some of the variables they used.
Testa et al (2017) then compared the GMSR and IPTS models to possibly integrate those factors to explain SI in Trans people.  (Testa, et al., 2017, p. 125.)  For this, their study had 816 respondents, 86% of whom were white.  They made an effort toward representation.  “In addition, specific e-mails and postings were distributed recruiting “Trans People of Color” on applicable listervs, social media sites, and through professional networks of study collaborators.” (Testa, et al., 2017, p. 128.) 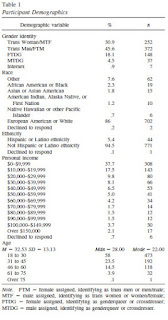 (Testa, et al., 2017, p. 129.)
When integrated, the model looked quite different.  The major absence I noticed was the lack of positive mitigating factors from the GMSR model.  I assume that these are accounted for by the IPTS model’s third factor: lack of fear toward dying, which while also not represented on the integrated model, is the mitigating factor in that model. 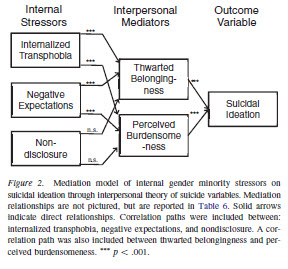 (Testa, et al., 2017, p. 129.)
However, their research also found “Although no significant differences were found in current SI based on race or living environment, SI did vary based on age, socioeconomic status, and gender identity.” (Testa, et al., 2017, p. 133.)
Conclusion
In researching Trans related violence; I hoped that whiteness wouldn’t be as prevalent as it was.  The research showed that Transpeople of Color experienced far higher incidences of violence than white Trans people, yet all the research used white as the baseline.  Burnes, T. R., Dexter, M. M., Richmond, K., Singh, A. A., & Cherrington, A. (2016) listed multiple possible stress factors.
“For individuals who engage in both social and medical transition at various points throughout the life span, there may be multiple, intersecting traumatic experiences that can serve as stressors. Such stressors include childhood sexual and physical abuse …familial neglect and social rejection… discrimination in health care, educational, and employment settings…barriers in legal policies…housing discrimination…and high rates of hate crimes…” (p.75.)
They mention all of those intersecting factors, but neglect racism, the intersectionality of which is a major factor in the lives of Trans of color.  This reinforces the concept of necropolitics, which before this class I’d never encountered.
The extraction of value from Trans of color lives through biopolitical and necropolitics technologies not only serves the sovereign, but also indexes much more subtle and complex shifts in power.  Trans rights activists' participation in and complicity with this process is what compels us to make this intervention. (Riley, S. C., Jin, H., Aren, A., & Susan, S., 2013, p. 71.)
The researchers I cited in this paper have the best of intentions.  They’re documenting violence in Trans lives, and applying that data to search for solutions to the problems Trans people face.  However, by using whiteness as their standard community, they ignore the people who suffer a far greater proportion of the violence: Trans of color.  Ignoring Trans of Color reinforces that they are more valuable as statistics to bolster agendas, as well as to generate outrage which only helps the white Trans community.
Reflecting on this class in general, and the research I completed for the papers assigned, I’ve had to re-evaluate my own thoughts and prejudices.  I examined my white privilege more deeply than I ever have.
I knew that Trans of Color were disproportionately murdered, and I’d read that was probably because more Trans of Color had to resort to sex work to survive due to the intersectionality of transphobia, misogyny, and racism.  Sex work put them in harm’s way, thus contributing to the higher murder rate.  It was a vicious cycle, which I would combat by trying to break the transphobia portion by activism and education.  Yay me. Yes, in my ignorance, I was buying into the whole “white savior” trope, even if I didn’t realize it.
That’s the difference: now I realize it.  I see the whiteness in the research, and understand the necropolitics involved in the lives and deaths of Transpeople in general, and Trans of color in particular.  However, seeing whiteness and understanding necropolitics isn’t enough.  I will be conducting my own research, and using what’s left of my life to work toward Trans rights.  I must apply the knowledge I’ve gained of these concepts to ensure that my research truly represents all Trans people, and that I remember that all these numbers and statistics represent the lives of people like me, some of whom have a much worse situation than mine.
One person will not end transphobia, racism, or hate in general.  It’s a process.  Just as those Trans people who came before me made my journey possible, so my work should make the journeys of those Trans people after me easier.  Only by keeping in mind what I’ve learned can I ensure my life and work have an effect on more than people like me.
It’s a dream I have.