For three weekends, I was in the play Dracula, held at the Forge Theater in Phoenixville. I played a small part- a minor role to be sure- of a Maid.   However, I was also stage crew moving things on and off the stage, and I also created a couple of the props.  Oh, and took a lot of pictures. 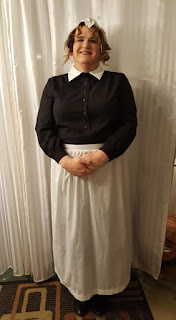 This whole process began back in September, when I auditioned and got the role.  I was surprised to get it- delightfully surprised.  I remember talking to people at the rehearsal, and thinking that they were all so much better than me at this.   After all I'd only been in one play as Sophie: the Vagina Monologues in 2017. In that one, I wrote my own piece.

But I made it, and I was there from the read-through all the way through the production. During that time, my part changed as I tweaked my performance, and the director gave me some tweaks as well. I had to make some of this role my own. For example, at one part I hummed a song.  I had to research a song popular in 1897, which is when the play takes place.   The song I chose was The Band Played On. I'd heard it before done by orchestras and such, but never knew what it was. I found an old recording on YouTube, and memorized it. When I first did this song, I waltzed around the stage (as it is in waltz time.)  That was a bit much, so the director said no to that. 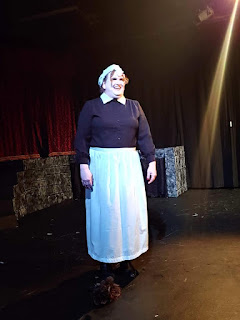 On Stage.  Photo by Dave Richman

We rehearsed for months.  It was a complex play with a lot of sound and lighting affects which I had nothing to do with, but I had to know when my cues were.  Fortunately, I didn't make too many mistakes... well, at least not with my lines.

I could tell so many stories about this experience! I told a couple of them in my TG Forum column a few weeks ago.  What I can say is that the experience was absolutely magical, and I wished it could never end.  But of course, all good things do come to an end, and our final performance was a matinee Sunday two weeks ago.

The matinee was sold out, just like all of our performances.  Yes, we sold out all eight of them, which is a very good record for January (especially for non-musical in that theater.) So I'm told. 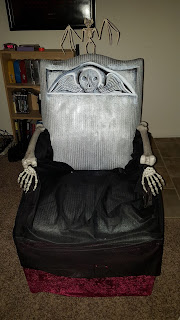 Renfield's Chair, which I modified and hand painted. 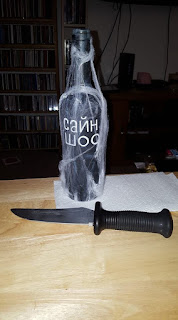 Props I made/painted.  The words on the bottle mean "Good sh*t" in Mongolian

I met many wonderful people, some of whom had become dear friends.  I must admit that most of them intimidated me from the read through on through most of the production.  Some of them were very talented actors- Theater majors and such.   They had years and so many plays behind them on their resume, and all I had was one.  In particular one woman really intimidated me- one of the stars: Sandy.

Sandy is absolutely drop-dead gorgeous, and an amazing actress.   I was sure that she acted for a living, but as it turns out she doesn't.  I didn't speak much to her, then again I really didn't speak much to anyone, aside from making my usual bad jokes, you know, to cover my nervousness and insecurities, but almost everyone was so nice to me- even knowing I am transgender.   As it turns out, Sandy was as nice as she is beautiful.  I wish I could have spoken up a little earlier and gotten to know her better.

Again, almost all of the cast were extremely nice. The woman playing Mina, Safiyyah, was the youngest person in the cast, and she was so incredibly talented.  I wouldn't have guessed by the way she played that role that she wasn't a graduate of a theater program.  She isn't- in fact she still a college student and not a theater major. 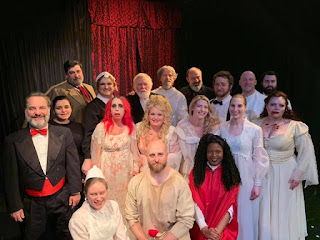 They show featured to Dracula's and older version and a younger version both of them were theater veterans and both of them were absolutely fantastic. The younger one, Matt Lake, is also an author. He wrote Weird Pennsylvania.   Loren played the older Dracula, and he was full of fun tales of plays and jobs that he'd had pretty much all over the world, but especially the UK.  As Matt is from Birmingham in the UK, they had a lot to talk about.

Dracula's brides were the Vixens, and there were four of them.  I had to say that I think I became closest to two of those Vixens maybe because I saw myself in them.  Also because they chatted with me.  A third vixen, Lauren, was not only incredibly beautiful, but she was also a lawyer and a dancer.  Her Vixen danced ballet, and was absolutely incredible to watch.  I watched her a lot at practice, and I could not believe that anybody could be so flexible! I saw a video of her doing the piece on stage while wearing a long gown.  You see, I have never seen this play.  Not the completed version anyway.  No, I saw just what I could see through curtains as I waited to move things around, and some parts I couldn't see at all- like the Vixens. 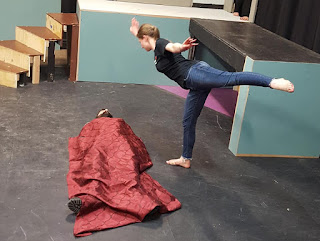 As I said, the Vixens reminded me a lot of myself.  They all had incredible strength, which I wish I had.  I don't think they realize their own strength.  Two are authors; one writes Gothic horror, and she looks the part.  She's slim, pale, and beautiful.  If you were going to picture a Goth chick, you would picture her.   The other was more metal, and she rocked a corset!  She was extremely outgoing.  She also wrote a children's book.

A couple of the cast members are gamers.  I've tried to set up a game, but it hasn't happened yet.  One is actually hypnotist!  Others do other jobs.  Most of them have found roles in other productions, and are already in rehearsal for those.

I auditioned for another role, but did not get it.  I think that, for me, the experience is over- at least for a while. 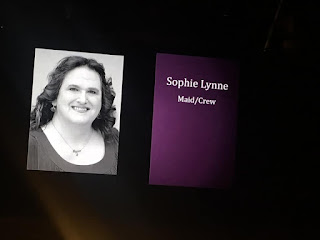 In a way, I'm still processing what it all meant to me.  I know that, for that time, I felt part of something- something fun.  A group of strangers became like a family to me (albeit dysfunctional and full of characters.)  I knew that I'd find Kristin on the stairs to the dressing room, reading a book.  Or that Joe "warmed up" wearing headphones and dancing.  That Alexis would be at the makeup table, and that Jay would always be late.  That everyone would be glued to their phones during down time while still laughing and gossiping.  Robyn would be obsessing over the baby mixture, and the beautiful Kimmie would need help with her corset.  There was a serene familiarity to it all. 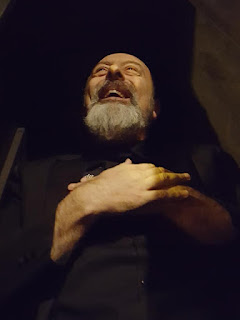 Matt Lake as Dracula during rehearsals