There's something bittersweet about the end of a school year in college.  Most people get four of them- with the last one being final.  As a transfer, I got three at PSU.  The first three mean a summer apart: from the people and place you love.  I desperately missed PSU over the summer.  I missed the freedom, the parties, and the people.  Yes, I still saw Virginia over the summer, but the relationship was already falling apart.

Penn State was already my home, and my parents' house was a purgatory.  I stayed away as much as possible- working two bartending jobs.  I was working during my grandfather's funeral that summer.  Going back for Arts fest was one of the best weekends of my life, as it reminded me to be grateful for what I had.

What I didn't know is how different the experience would be when I returned in the fall, for so many reasons.  That first year at PSU was the best of my time there, but I didn't know that at the time.

Suit and tie were required- not just the jacket and tie that allowed many brothers to show up in shorts or whatever.  This was a big deal- Senior Dinner, and more important: Room Pricks.

Senior dinner meant that several tables were lined up near the dining room fireplace separate from all the others.  These were for the guys graduating that semester.  Everyone else sat in their normal spots. 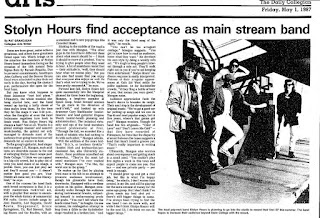 Dinner was very fancy- the seniors had a veal and crab dish that Sparky prepared.  The rest of us got catered lasagna which wasn’t bad.  When we finished, the Deltas cleared all the plates and shots of good bourbon in nice rocks glasses were set in front of each senior.  The rest of us had beer in plastic cups distributed by the pledges.

Maple, the Alpha, raised his glass.  “To the class of 1987: you will be missed.  Go far, succeed, and always remember you are a SKULL!”  Everyone (except the seniors) started to sing.

Hail to thee, loyal Skull House, Sweetheart of my youth,
Crown'd thy brow with fadeless laurels, Pledge we now our troth.
Join in chorus, wake the echoes,
Shout it loyal chaps!

With that, the seniors drank their shots while everyone else chugged their beer.  Then, one by one each senior threw his glass into the fireplace, shattering it for all time.  When all were broken, the brothers surrounded the senior table and the new alumni.  There were handshakes, hugs, and maybe a tear or two.  After all, this was Goodbye to Big Brothers, Pledge Brothers, or just treasured friends.

The seniors then left for the Adam’s Apple to drink together as was tradition.

The rest of us?  It was time for Room Pricks!  LPC or pledges set up a keg near the kitchen.  Two huge brown papers with a map of the Bone’s third floor on one and second floor on the other were hung on the wall above where the seniors were so recently sitting.

The whole thing was run by the Pi (Academic chairman.)  The rules were simple.  Oldest pledge class chose first, and then in order as time went by.  Within a pledge class, the selection went by GPA: best GPA chooses first.  The person can choose any available room, and can also “pull someone in” to his suite as a suite mate (or roommate if desired.)  Also, the first person in a suite chose which of the center doors would always be locked, thus assuring that no one would walk through his room to the center (suites were three connected rooms).  Got all that?

So, why was it called “Room Pricks?”  Often one guy would keep talking for weeks about how he wanted a given room, just to have a guy above him in the picking order take that room on purpose, or pull someone into that room, again just to piss that guy off.

Why?  Because it’s Room Pricks!  You don’t need a reason! 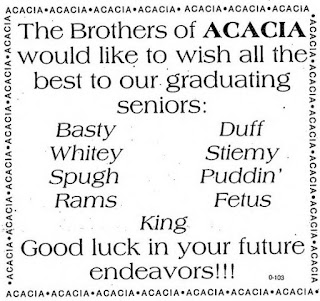 So after an hour of screaming, yelling, laughing, chugging, and one near fistfight, there was one room left.  As last to choose, I was asked if I wanted it and I said “yes.”

The room was on the second floor, front side of the house above the club room.  It was very small and it was the first one a person would pass if heading down the hall toward the icebox.  The guy in the center room of the suite, Wags, was really cool, so that helped.  I didn’t want an asshole marching through my room at all times of the day and night.

I would have a roommate, but I hadn’t met him yet.  He was a football player from Penn transferring up next year.  I guess the “football player” part allowed him to avoid the bullshit I had to tolerate.