Men of the Skull Chapter 63: BSB

Pledging is a strange time.  The idea behind it is to create bonds within the pledge class and fraternity by having them endure shared hardships.  However, I believe that some people really enjoy the sadism that can be involved.  Of course, part of this was to show that one could "take it like a man."

In my undergrad years, it seemed that each class had to endure just a little worse treatment.  Brothers would say "well, I had to take it, so..."  then add their own brand to whatever stunt was happening.

That said, sometimes the idea is a shared fun experience.  If kept under control, this can be a good thing.  We had "games" at Skull.  Of them all, this was the goofiest and arguably the most fun.  I say this having never been on the losing side of it.

“You maggots fucking suck!”  Ernie shouted down from his perch on the landing.  The pledges were bunched up beneath him.  “We’ve never had such shitty pledges!  Something needs to be done!”

“Games!”  “Games!”  The shouts rose from the brothers on the carpet behind the pledges.

Then, the inevitable suggestions from the Hood:

Ernie held up his hands to stop the shouting.

“A FEW RULES!” the Hood shouts into the pledges ears.

“Second rule!  Line up and each of you choose the brother you want to party with the most!”

They lined back up in order.  One by one, the pledges shouted the name of a brother.  The Hood would shout stuff like “Bad choice!  He’s the best at this!  “You’re fucked!”.  Then the pledges were sent running back up to the pledge closet as the brothers set up.

LPC took the lead in this as always.  The dining room lights were turned on.  We were using the 4 tables visible from the foyer.  All chairs were removed from the “inside” side of the tables except one at each.  Opposite that seat were two chairs for brothers.

The full name of the game was “Bourbon, Scotch, Beer” after the George Thorogood cover song.  It was a relay race- the pledges vs. the brothers they picked.

The first table in was the shot table- first a shot a bourbon.  Then the player would move to the second table, where they’d chug a can of beer.  They’d go back to the first table where they’d down a shot of scotch. Then they’d run back and tag the first person in line and it would be that person’s turn.  First team done wins. 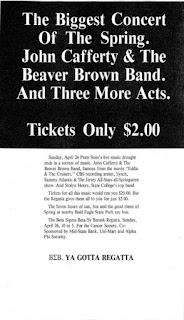 Now, as always, we knew what was coming, so during the pre-meeting all of us cracked open beers and drank about half.  These beers were on the hood’s table.  Each of the shot tables had two bottles of bourbon and scotch.  On the Hood table, one each was filled with iced tea.  In addition, as the pledges were upstairs, we shook the shit out of the cans on the pledge table.  While we set up, the selected brothers were upstairs getting “dressed.”  For some reason, this was a “costume” event

After the brothers were ready, they told Ernie how they wanted to be introduced, and then waited at the top of the Brotherhood steps.  The lights in the Foyer, Club Room, and dining room were turned off.  The siren sounded, and the pledges scrambled down the back steps to their position lined up in front of the Hood, and counted off.  The Hood shouted for them to turn around and face the Iota, who instructed them to line up behind Brother Good, who stood at the entry to the club room.  They did so, and then all the lights came back on.  The pledges looked at the set up and their faces seemed to say “what in hell do we have to do this time?”

Me?  I sat at the brothers’ beer table with Wags.  Best place to sneak a few drinks myself.  “Watch me the first few times so you get the hang of it” Wags said, smiling as we toasted beers we’d just opened.

Ernie came down the stairs and stood in the middle of the foyer.

“BSB! BSB! BSB!”  The Hood chanted until Ernie motioned for quiet.  The Hood stood to the sides of the foyer and dining room, leaving the playing field clear.

“As always, anyone who does not wish to participate may step away now.  No one will feel any less of you.”

The pledges looked insulted, and stayed in line.

“Are you ready to meet your opponents?”

“First!” yelled Ernie, pointing to the stairs, “From the jungles of the : CHIEF BEEF!”

Beef hopped down the hood steps dressed like an island headhunter complete with headdress and spear, shouting some kind of made up gibberish, while the brothers cheered and chanted “Hood! Hood!  Hood!”  Beef took his place at the head of a line next to the pledges, who were laughing their asses off.

“Next: master of the martial arts and ninja extraordinaire: Kung Fu Ninja!”

Ninja trotted down the stairs, wearing his gi and black belt, bowed to Ernie, then to the pledges, and struck a kung fu pose.  He then got in line behind Beef, who high fived him.

Dogger strolled regally down the stairs wearing a bedsheet as a toga.

I had put together a tape of the Thorogood song played over and over for forty five minutes (my contribution to the game).  One brother (LPC) stood at the top of the stairs, and another at the stereo closet across from the Alpha suite.  When Ernie shouted “music!”, the guy at the top of the steps would relay the order to the other guy to start the tape.  Same for “stop!” at the end of the race.

The guitar riff started and faded in.

As George started singing “Wanna tell ya a story… about the house-man blues” I watched Beef do an exaggerated bunny hop/ tribal dance to the first table.  As he sat down, his pledge opponent was still asking permission.  Beef leisurely sipped his iced tea as the pledge asked the brothers behind the pledge shot table “May I please have a shot?  Pretty please with sugar on top?”

Beef did some kind of tribal spinning dance from the first table to the next, where he sat in front of me.  Wags handed Beef a half filled beer, and he put his feet up on the table while drinking it.  The pledge was just seeking permission to leave the shot table.

The pledge ran to the next table, eventually was seated, and asked for a beer.

“Do you really want it?”  Rich asked.

Rich opened the well shaken beer so that it sprayed all over the pledge, to the delight of everyone watching.

By this time, Beef finished his shot of “scotch” and hopped back to the line, tagging Ninja as he passed.

The pledge finished his sudsy beer, secured permission to leave and ran to the shot table.

And so it went until all the pledges completed the course.  The brothers won by quite some time, of course.  The assembled spectators chanted “Hood!  Hood!  Hood!” and Ernie called for the music to stop.  The whole first floor smelled badly of beer- worse than at a party.

“Do you think you won that game?”  Ernie asked the pledges.

“Did you enjoy that game?”

George picked up where he left off  “Well I ain’t seen my baby since I don’t know when. I’ve been drinkin’ bourbon whiskey, scotch, and gin…”

Beef tangoed to the first table with Ernie.

This time, the pledges were actually allowed to be competitive.  And they pledges all puked after drinking the warm foamy beer.

The Hood won again.  LPC cleaned up.  I turned to Wags as we both finished a beer.

“What was the point of this game?”

“Point?  Does any of it have a point?  It’s just fun.  That’s all.”  He smiled and offered me another half empty beer.