I've posted bits from my book, Men of the Skull, on this blog occasionally.  Even as thoroughly researched as that book is (VERY thoroughly), I couldn't put every niggling detail in there.  In fact, it needs a strong edit because I put in far too many.   The major reason is many of those details just wouldn't resonate with anyone except those who were there as well.  For example, I can write all I want about a Grateful Dead show, but unless you were there, there's no way to write about everything so that it would be understood.  It wasn't just the music- it was the "vibe", the feelings, the settings, the people... all of it made for the experience.  Let's face it- the Dead weren't the most physically demonstrative or exciting band to watch!  But that didn't matter.

In that same spirit, is Space Goop at Acacia.  Among many people who attended PSU in 1986/7, that phrase means something.  Like on that Star Trek TNG episode "Darmok and Jalad… at Tanagra" means something to the Tamarians who speak in metaphor.  It's a cultural reference.  Another example would be if I refer to swallows carrying coconuts- many get that right away, as I'm quoting a well known movie. 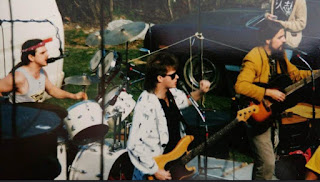 In any case, Space Goop was a band at Penn State in spring 1986 (I don't know how how long they lasted, as I found a reference to them in a March 1985 Daily Collegian article), but I know that by fall 1986, they'd broken up.  Space Goop was JR Mangan (guitar), Mike (bass) and Dave (drums) Biddison.

Acacia was and still is a fraternity at Penn State and other campuses.  At PSU, they were a very short walk across a tree studded lawn away from my fraternity house.  They were considered a major house at the time, and I'm told had great parties (I have never to this day been inside that I remember.) 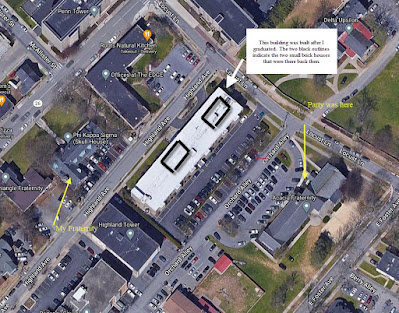 April 12, 1986: that was the date of the annual Phi Psi 500 that year.  Phi Psi is half a block away from Acacia, and they scheduled the band that day to ensure a huge crowd- which they got.  (I described the Phi Psi 500 in detail HERE.)  It was a beautiful sunny day, everyone was festive due to the Phi Psi, and Space Goop was on stage.

I didn't transfer to Penn State until that August, so how would I know all this?  Three reasons.  The first was that Collegian article.  The second was by reading accounts by people who were there (on facialbook.)  The third?  Well, that's the topic of this post.

Someone plugged into the soundboard, and recorded over a little over 90 minutes of the show (which lasted a good part of the day, as well as continuing inside that night.)  Back then, recording technology meant... TAPE!  For you kids out there, there were these things called "tape players" and they were the preferred method of listening to recorded music at the time.  Compact Discs were available, but really expensive (and non-recordable.)

By the time I arrived at Penn State that August, that recording spread all through the Greek community if not all of campus.  Everyone who was anyone had a copy.  I heard it at apartment parties and at least once in a dorm party.  At my fraternity, the guys would put stereo speakers in the front windows of the second floor, and that fall, the music was either Grateful Dead (usually Dead Set) or Space Goop at Acacia (SG@A).  I managed to tape a copy off of one of the brothers (I think his was a third or fourth generation copy) and I listened to it a lot during my college days.  Sometime after graduation I lost the tape.  Maybe I loaned it to someone- I don't know.  Point is that by 1991, it was gone.

Fast forward decades.  On Facialbook is a group for Penn State alumni... of a certain... vintage... (primarily 60s-early 90s) on which we share memories, swap stories, post pics, etc.  SG@A came up occasionally in stories and such, and at least one person (me) would ask if anyone could make a copy of it for me.

Last week, Brian Hulek messaged me.  He was the Acacia Social Chair at the time who put together that party, and, more importantly, he was the guy who made that recording.  He previously had no idea of what happened to the original tapes.  However, apparently... they were FOUND!  He digitized and uploaded them.  He then reached out to offer me a copy.  I asked how much and he replied "No $$$.  We share the joy!  I am insulted!"  (followed by a winky face emoji.) 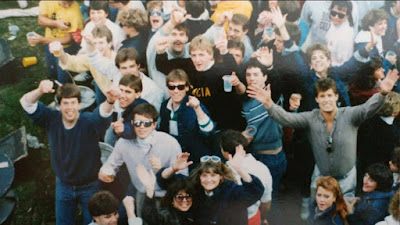 Partiers on Acacia lawn that day.  Courtesy B. Hulek

In any case, he sent a copy, which I eventually figured out how to download into my iTunes.  Then, I listened.

First off, the whole recording he sent was a good 30 minutes longer than the one I had.  The song that started my tape was "Can't You See?", which was over a third of the way through the set.  More importantly- it was a clean copy!  Second generation at worst!  The sound was like being there!

1. Fire on the Mountain

3. Walk on the Wild Side > You Can't Always Get What You Want

11. Me and Julio Down by the Schoolyard > Day-O

I was in Heaven!  I sent him the following: (edited for punctuation and clarity):

"Listening to it gave me an intense pang of (nostalgia?)  It brought me back to a time and place now so long past.  I was not at PSU when this party happened- I transferred up in Fall 86.  However, that semester everything was so new, exciting and different.  One of the biggest differences was my fraternity (I joined at Drexel.)

One of the best memories was this music.  It seemed EVERYONE in the house had a copy, and it was blasted from the speakers placed in the front windows on beautiful days those first few weeks.  Of course, by then, Goop was gone, so I never saw them.  But the idea of Goop- a party band full of life, and a party on a lawn with students drinking, dancing, and loving their youth- always stayed with me.

I was adjusting to a new reality in a wonderful new place and had so much ahead of me- so many incredible memories yet to be made.  Space Goop at Acacia will always be a time capsule to that time, and THIS is what you've returned to me: that music and all it means to me.  Thank you, from the bottom of my heart."

He sent me the following back:

Little known fact- The agreement I made with the band was 1 long day set then 2 sets inside at night. After the long day set  was concluding, we were having way too much fun to stop. I wasn’t going to change the night schedule so I ran in the house and without authorization wrote the boys a check for another $500 to keep playing. After the night session we partied with the band til sunrise!

So, not only did I get the music, I got a bit of of the story with it!  He also sent some pictures, some of which appear in this blog entry.

As I mentioned, Space Goop broke up over the summer of 1986.  One member, J.R. Mangan, went on to form Stolyn Hours, which became one of the top bands in State College.  They released an album as well.  The other guys played as Ticapoo Brain before disappearing from the State College scene.  J.R. stayed in State College, and has owned the Cafe 210 West for some time now (still one of the best Long Island Iced Teas ever!)

It's been 34 years since that day.  Listening to the music, I wonder what people who weren't there (or never heard of the band) would think of it.  I think it held up well.  My roomie/bestie Linda thought it was quite good.  The songs are still classics (except for the one original, the reggae influenced "Nature Calling") and the renditions are quite inventive, including dropping the Hokey Pokey into Truckin'.  Some of the on-stage patter is... um... dated (a few of the comments wouldn't fly these days) but the rest is cheerful and fun.

I write about nostalgia and my past quite a bit on this blog.  Well, it's my blog and I'll write what I want to, write what I want to, wriiiite what I want to.  I guess I'm not just remembering bits of my life, but I'm still trying to make sense of it.  That first semester at PSU started as a disaster, as I had only one friend, missed my ex-girlfriend, was hated by most of my new fraternity brothers, and ended up working back at Burger King for money.  However, by October, things turned around and became absolute magic (mainly due to a pair of girls I met.)  I still see that as the best semester at PSU, as everything was still so new and fresh and full of firsts.  Also, it ended with the Nittany Lions winning the National Championship over the Miami Hurricanes.

Writing this, I wonder what happened to the people there.  Who was the drunk girl shouting for a song to be dedicated to her sorority (Chi O)?  She's probably a mom or even a grandmother by now.  Did any couple who eventually married meet there that day?  Does anyone really have a clear memory of it?

Still, I wonder how things would've been different if I DIDN'T have my "dark secret" to hide- if I'd just been cisgender like everyone else.  Or, for that matter, if I'd been born completely female.  I'll never know those answers obviously.

I'm back at Penn State now, decades later, living my Truth as a woman, albeit a woman of a certain age.  Like all people of my... vintage... I have my memories.  Many of my best (and a few of my worst) were here at Happy Valley, and I'm making new ones frequently, as well as occasionally updating the faces and names of those with whom I shared that magic heartbeat in the late 80s.  As I've written elsewhere, our Penn State is long gone, and lives only in our memories.  Thanks to Brian, and the music of a band long passed, some of those best memories again have their soundtrack.

Thanks to Brian Hulek for generously sharing the music, and his gracious permission to use his photos and words for this entry.

I've added a second entry about this day with stories from people who were there.  Find that HERE.