I tend to avoid mirrors, as I keep seeing a guy staring back.  However, a little while ago (June 1) I noticed something different.  I noticed that my hair was graying at the temples.

Back before I rediscovered myself, I said I'd go bald and gray with dignity.  For one, treatments would be expensive.  And for two, I didn't care about how I looked.  Then there's the fact that I never thought I'd live long enough for it to be an issue. 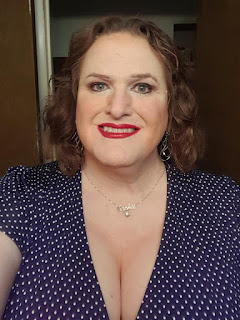 Wife has been going gray for years- her grandmother had snow white hair at 30.  Also, being married to me is enough to make anyone age prematurely.  Add in that she lives with MIL and is raising Daughter... I'm surprised she hasn't gone bald from pulling out her hair.

I've been taking finasteride for hair loss since 2013.  That's hard core Propecia and it REALLY works!  However, guys wouldn't like the side effects- shrinkage below and boobs above.  For me, that's a bonus!

I'm still not going to color my hair.  I'll go grey.  However, as a thought exercise, I went to the Revlon site to try different hair colors.  Y'know, for shits and giggles.

These are the results.

A close relative used to die her hair orange.  It wasn't supposed to be, but it was.  So here's that look as well. 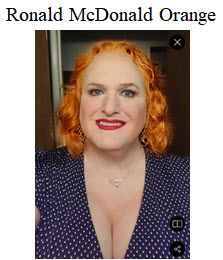 What do you think?

My fave would be the dark brown, edging out the red... barely.  My hair is auburn in the summer, so I could've done that, but... nah.  I must admit though- the purple is intriguing.

There you have it.  I'm 53 (as of this writing) and look it.  I'll never fool anyone into thinking I'm in my 20s or 30s again (or even my 40s!) so I'll just accept what comes hair color wise.  Of course, changing her mind is a woman's prerogative.

Oh well, a touch of grey kind of suits me anyway. That is all I have to say and, it's all right.