Men of the Skull Chapter 186: Graduation

How do you say goodbye to a dream? Penn State was a dream come true in so many ways. I remember thinking that on my first visit to PSU, that I'd found Paradise- college as I always imagined it could be.

For me, as an institution, it was all that.  While he learned it wasn't that way for everyone, and I (along with many others) did what I could to improve things.

However, not everything was wonderful.  My fraternity, for the most part, treated me like shit for being a transfer student (and because I was "different.")  I had my first grown-up relationship- with the wrong person.  I did things that I still regret now 30+ years later.

Still, there was Magic- a Magic that all of us shared, and keeps us coming back.  As I type this, I'm back at PSU working on my doctorate.  I'm old enough to be the parent of the undergrads.  And I'm a transgender woman.

This time of year, I can't help but think about those last days.  For an education major like me, the last semester was spent away from school, student teaching.  So technically, my "last days" were before Christmas break.  But graduation... that's the period at the end of the chapter

Many people transition smoothly from college to jobs without a thought.  I wasn't one of them.

I spent the day wandering around again.  Many people went to the bars and drank all day or hooked up or whatever, but as I had very little money, I had to conserve it.  I picked up my black cap and gown.  I wanted to tell them that there was some kind of mistake, that I still had credits to take, that I still had friends- that I still had parties to attend.
I knew it was over, though.  Last fall, Dave was gone- up to .  What would being here be like without Judy?  I couldn’t imagine it.
That night, I went to the Skeller to see Queen Bee (the reason I saved all my money.)  I saw some people I knew from the summer before or from classes, and tried to make small talk, but Queen Bee was, as always, really fucking Loud!
You got to love me with a feelin', or you don't love me at all.
Last call!  I ordered one last Rolling Rock and cheered as the band finished their encore.
Instead of heading uphill back to the Bone, I headed uphill in the other direction: onto campus.
Campus was completely deserted in the rain.
The Lion was alone as well.  By then I was fairly wet, so I didn’t mind getting a wet ass by sitting on the Lion’s base.
“Well, I guess this is it.  Next time I see you, I’ll be an alumni.”
The Lion stared in the same direction that it had for all those years.  Cold stone.
“I’ll miss you.  Stupid as it is to miss a hunk of stone.  I guess I’ll miss what you represent.”
The rain splashed around us.
“I don’t want to leave.  I never want to leave.”

Me at the Lion

Graduation was scheduled for 1 PM.  The ceremony was in Eisenhower Auditorium, a little away from the bigger schools’ graduations, but that was ok.
My hangover woke me up around 10:30.  I slept on my old couch one last time, because at least I knew where it had been.  My parents were arriving in half an hour, more or less.
Somewhere in the house, someone was cranking the Dead.  It was appropriate.  If Skulls were going to graduate, to leave, it may as well be to the Grateful Dead.
Goin’ to leave this
On my hands and my knees I will roll, roll, roll
I showered, shaved, puked, and dressed in my blue polyester suit.  I was ready as I could be.

Dad, mom, and Jeff arrived around 11:15, just when the rain stopped.  Dad wore his usual mud brown suit and mom wore a purple dress which was offset by her orange dyed hair.  Jeff wore a shabby black suit.  He hadn’t showered, shaved or even combed his longish hair, and he wore black “Terminator” sunglasses.
“He slept all the way up since he came in at five this morning” dad said, glaring at Jeff who drooled just a little.
I knew how he felt.
We somehow managed to get a table at the Gingerbread Man.  I needed food and hoped I could keep it down.  The crowd was strange, half in suits the other half in shorts.  After lunch it was about 12:20, and I had to get to Eisenhower.  I walked them up to the building, and went inside, cap and gown under my arm, stomach churning.
I pulled on the gown- backwards at first, and found my place.  We had one rehearsal.  I was behind Sandi.  She was so excited I thought she’d blow a fuse.
“Oh my God, Lance!  Can you believe it’s really happening!? Oh, I shouldn’t have worn these shoes, I am so going to fall right on my face on stage!”
Her cap and gown had decorations indicating honors.  Her mortarboard was bobby pinned to her immaculately styled and sprayed hair at a perfect 45 degree angle.  She looked really good.
My gown was simple black.
“Yeah.  It’s happening” I said, forcing a smile.  “Did you go out last night?”
“No, my family came down from .  We thought we’d have the big dinner last night since every place will be packed tonight.  Did you go out last night?”
“Yeah.  Went to the Skeller to see Queen Bee.”
Sandi laughed.  “You Skulls!  You’ll be drunk the day of your own funerals!”
That didn’t make much sense.  Smile and nod.
We made a little more small talk as everyone ran through the ceremony once.  The auditorium was already getting pretty fucking hot.
After we finished rehearsal, we had ten minutes for whatever.  I had to take a leak, then I needed aspirin and water.

At 1 PM exactly, we filed into the auditorium and sat in our assigned places near the stage.  Parents and whomever were seated behind us.  The Dean of the College started by apologizing for the air conditioners being out.  So that was the problem!
Speech.
Speeeech.
Speeeeeeeeeeeeeeeeeeeeeeeeeeeeeeeeeeech.
Hey!  It’s fucking hot in here!  Can we get moving?
Finally, we lined up and were called across the stage one by one for our diplomas.  As Sandi was on the step above me, I had a great view of her nice ass.  She turned and said “Oh my God!  This is it!  Good luck Lance!  Hope I don’t trip!”
“Good luck, Sandi.  You won’t fall.”
Her name was called, and she strutted perfectly on four inch heels across the stage- the picture of confident womanhood.  That was the last I ever saw of Sandi, and it was a great image to remember her by.

I mounted the stage and walked across to accept my diploma and out the door to a reception type area.  High fives and tossed hats.  And too soon, parents.

My parents, brother, and I walked across campus toward the House.  From there, we’d go back to , leaving my home for the past few years- the first true home I’d ever known.  My family and I walked without speaking- like we were coming from a funeral.  Walking down a path some distance away was Judy, her brother, and her mother.  My heart leaped and died in a moment.  They were laughing and happy.
Judy’s group waved to me from a distance.  She smiled at me and held my eyes for a moment.  I waved back.  Tried to smile.
I watched them walk down the path and turn the corner.
“Who was that?” my mom asked.
“A friend” I said quietly.  “Just a friend.” 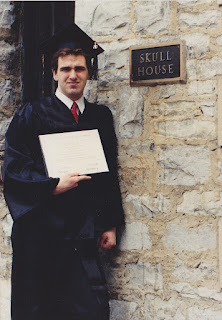