I wish I could sugar-coat this entry, but sorry folks, this one is gonna be brutal.

If you read the last entry, you know that my friend JoAnne Roberts passed away.  I'm still trying to sort that out in my head.  I mean, I heard that she was sick, and the very next day I heard she's gone.

And there was nothing ANY of us could do.

Angela Gardner wrote a wonderful piece about it for TG Forum.

The day after she passed, I had to go on a trip.  I didn't want to, really, but Wife called in a marker.  You see, her family was renting two vacation houses down in Bethany Beach, Delaware for the week.  One was for Wife's middle brother, his wife (the homophobic bitch I mentioned here), and their litter of five.  The other was for Wife's youngest brother, his wife and their four kids (one of whom was 10 days old on Saturday), Wife, Daughter, Mother in law (MIL), Wife's Uncle (MIL's brother) and his wife... and me.  At least for one night, as Wife wanted me to drive her down there.

So, as no one would be home, we brought the Dog with us to my parents, who live in southern Delaware not far from Bethany Beach.  We were to stop there, drop off the dog, then head to Bethany.  I would stay the day.  That night, we would take my parents out to dinner for Fathers Day, then the next morning early, I'd pick up the dog and head home, where I'd be alone for a whole week.

A day at the beach.  Even with my wife's horrific family, how bad could it be, right?

So we woke up early Saturday and hit the road.  On the way down, Wife happens to mention something.

"My mom told me she thinks you're a crossdresser.  She mentioned you shave your legs and wear earrings and then there was the laundry thing."

"I didn't say anything.  I kept stone faced.  Thank God she's not good at reading people."

And that was all she said about it before changing subjects.  And she would discuss it no further.

So.  My incredibly everything-phobic right-wing hate filled MIL thinks I'm a crossdresser.  Which I'm really not, but that's splitting hairs.  The fact is she'll be LOOKING for evidence of transgender activity.

In my educated opinion, I am SCREWED.

It will only be a matter of time before she finds some form of proof that I'm transgender.  And then all hell will break loose.  Needless to say, this news made me very anxious.  I texted and emailed people for advice.  Mostly they said "she can't prove anything" or "so what?"

Well, Wife and I live under her roof... THAT'S what!

Before I told my wife about being a woman, I made plans and back up plans.  I still have these plans.  Part one is to pack up everything I want to keep or that I can sell for food money.

We arrived at the beach house, and MIL was already there.  It was pouring rain.  We unpacked our car... and hers.  I was soaked.  Then, my daughter, being so excited was hyperactive... and Loud.

Within an hour, the Uncle and Aunt arrived.  He is a Navy retiree.  Submarine service.  He and his wife are evangelicals...and hard core right wingers.  They are both quite pleasant except when politics are discussed.  They passionately hate anything to do with President Obama. "N" words are commonly used by them in reference to him.

He looked at me strangely, but said nothing about my appearance.  He offered me a beer, which I accepted.  Before it was finished, the youngest brother and his family arrived... and the noise began.  There were now five kids under the age of six... and all were over excited... and trapped indoors by the rain.

There was no escaping them anywhere in the house.  I tried to take a nap and they jumped onto the bed, shouting.  I wanted to take a ride somewhere... anywhere.  I was still dealing with JoAnn's death and the news Wife gave me... and all the screaming didn't help.

Wife said "No, you are NOT leaving me here alone with them."

Ummmm SHE was the one that WANTED to be there!

Then the middle brother arrived with his wife and five kids...

At one point, I locked myself in a bathroom and cried quietly.  Twice.  The kids started knocking on the door wondering what I was doing.

Eventually, the time came to go to dinner.  The sun finally came out.  We went to Harpoon Hannahs, which is a great place.  Dinner was good.  My daughter fell asleep.  Go figure.  On the way back, I stopped to get wine.  I knew it was going to a long night.  When we arrived back at the house, the middle brother and his family were gone, but the kids were in overdrive.  And my daughter had her second wind.

And the TV was tuned to Fox news, so MIL and the other two old people were fired up.

As the weather was clear, I asked Wife to take a walk with me.  It took her fifteen minutes to clear it with her mom.  Then we walked for a little while.  I asked her again about what her mom said... and she refused to discuss it.

We stopped and got ice cream, then walked back to the house.  Then the long process of taming all those kids and putting them to bed began.

After that, I had a glass of wine.  I walked out onto one of the porches, sat down and cried again.  I was the only one awake at that point.  I was completely broken and felt hopeless.

I was supposed to go to Harrisburg that night for a TCPA meeting, and see friends.  Be Me.  Be happy.  Instead I was trapped miles away.  In drab.  Yes, I was feeling VERY sorry for myself.

During the night, I was awakened several times by children crying in the darkness.

At 7:30, my daughter one of the nephews jumped on top of me, shouting "Daddy wake up!  One of them punched my right boob.  Ow!

Within an hour, I was on the road for picking up the dog, then to Pennsylvania.  Then to work.  This morning (Monday), I was up early for work.  Tonight, I started packing. 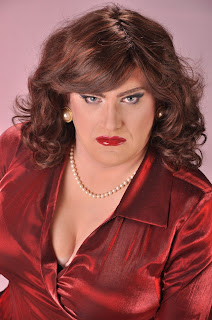 
One other thing happened Saturday that I'm still sorting out. In the AM when we dropped off my dog at my parents for the night, my dad indicated that he wanted to talk before we left for Bethany. So me, him and my dog walked out onto the pier as Wife, daughter, and mum waited by the car. He didn't look at me when he said "My days are numbered. I want you to take care of your mother when I'm gone."

My dad is not one for hyperbole. Or to discuss his health.  Ever.


Eventually dad went to the bathroom, so I told mum what he said, and asked what was wrong. She rolled her eyes and said "Ach, he's just being dramatic. He's convinced since all his siblings are having such poor health, he's next."

So, after this brutally long weekend, I woke up this morning for work, listening to a thunder storm.  It was peaceful.  I showered, then injected my estrogen.  Today marks six months on HRT.